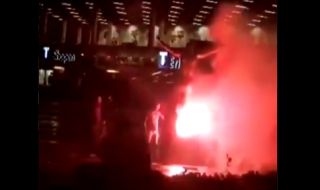 Earlier today, we reported on Malmo fans seemingly vandalising Zlatan Ibrahimovic’s statue by hanging a toilet seat off one of the arms following his investment in Swedish club Hammarby.

Well, it’s fair to say things have escalated quickly since then, with this lot now setting the thing on fire!

This seems like a *bit* of an overreaction, but clearly Malmo fans feel very betrayed by Ibrahimovic here.

The 38-year-old is a free agent after leaving LA Galaxy, and started his glorious playing career with Malmo.

His statue was erected earlier this year but it hasn’t lasted too long!