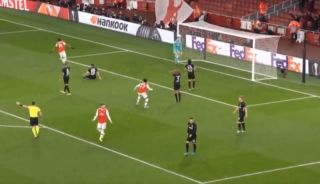 Pierre-Emerick Aubameyang has opened the scoring for Arsenal against Eintracht Frankfurt in this evening’s Europa League clash at the Emirates Stadium.

The Gunners needed this goal from the Gabon international after their recent struggles, with Unai Emery’s position at the club coming under the spotlight recently.

Aubameyang, however, has often got Emery out of trouble during their time together at Arsenal, and he’s done it again here with a fine finish.

The goal gives Arsenal a 1-0 half time lead, and they’ll be hoping to build on this in the second half and put on a bit of a show for their long-suffering fans.