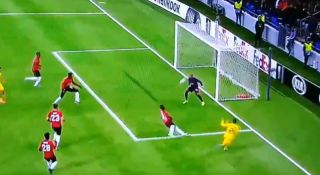 Manchester United are falling apart against Astana tonight, having lost a 1-0 lead in Kazakhstan.

Their Europa League opponents have quickly turned this match around, going 2-1 up thanks to this horror own goal in the video below:

Astana lead 2-1 manchester united with an own goal. #ManUnited pic.twitter.com/Ixc80m8tVG

Man Utd had taken an early lead thanks to a fine goal from Jesse Lingard, but Tahith Chong will now be regretting missing this sitter that could’ve put the Red Devils 2-0 up.

It now remains to be seen if Ole Gunnar Solskjaer’s side can even salvage a point from this game.