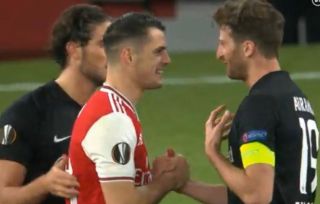 Granit Xhaka may have made his comeback for Arsenal tonight – and he may even have been surprisingly applauded by the home crowd at one point – but he could be in trouble with the club again here.

The Switzerland international recently swore at the Emirates Stadium home crowd after being subbed off against Crystal Palace, resulting in him losing the captain’s armband.

Tonight was the first time Xhaka played for Arsenal since then, but he’s immediately been spotted in a potentially controversial moment again at the Emirates.

Take a look at the photo below doing the rounds on social media, which shows Xhaka casually laughing with Eintracht players at the end of the game. 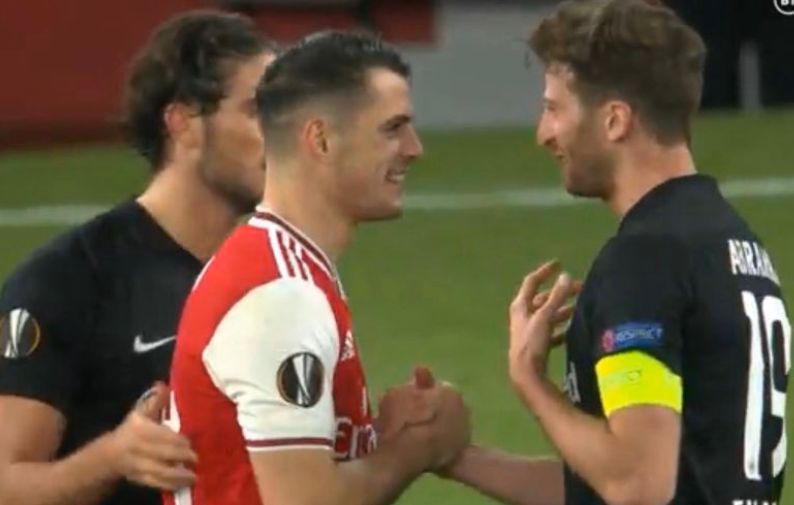 This doesn’t look like a player too bothered about the Gunners’ current plight – and most likely signals he really is expecting to leave the club in January.

What a dismal time this must be for Arsenal fans as their club’s fortunes just go from bad to worse.

Some are celebrating, however, as they’re convinced the sacking of Unai Emery is surely closer now after this latest defeat.

Good grief. I mean, I understand Xhaka not caring about the club or fans anymore, but after he’s been cheered back you’d think he could at least hide it until he got in the tunnel. pic.twitter.com/zMOpbqR7Jq