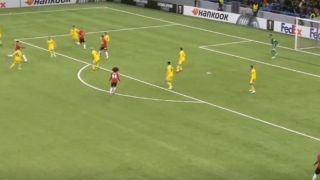 Jesse Lingard has scored from outside the box to put Manchester United 1-0 up away to Astana in tonight’s Europa League clash.

The 26-year-old has not been at his best for some time now, and many Man Utd fans were unimpressed with Ole Gunnar Solskjaer for naming him as captain tonight.

Still, Lingard has shown his quality with a fine effort from long range to give the Red Devils the lead in this tricky away match in testing conditions.

United fans will now hope this gives Lingard confidence to get back to his best after such a major slump for much of the last year or so.