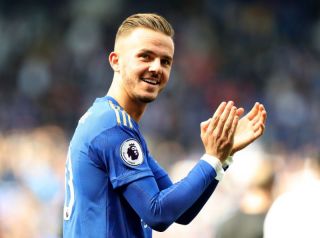 Leicester City ace James Maddison saw what was probably meant as an innocent tweet turn into an opportunity for Liverpool fans to call on him to join them.

As seen below, the 23-year-old like many of us enjoyed a video posted by Liverpool on their social media accounts which involved Virgil van Dijk surprising a Reds fan.

It was a classy and emotional gesture, and it no doubt went down well across the board for those connected to Liverpool and those outside the club.

Maddison came across it on Wednesday night it seems and simply added that it was a “great watch”, but his feed was then flooded with comments from some Liverpool fans who took it as an opportunity to call on him to make the switch to Merseyside.

Admittedly, some of the comments look as though they were made tongue in cheek as clearly this isn’t exactly a come-and-get-me plea from the England international.

Nevertheless, he clearly admires the video and the club’s work, and so perhaps there is something in it.

For now though, with Leicester doing so well and making brilliant progress under Brendan Rodgers this season, there doesn’t appear to be any reason for Maddison to want to move on.

Perhaps when it gets to a stage in his career when he wants to kick on and win trophies on a regular basis because his talent demands it and the Foxes can’t provide those opportunities for him, then question marks could be raised over his future.

We need you Madders

Madders we need you in our midfield so bad