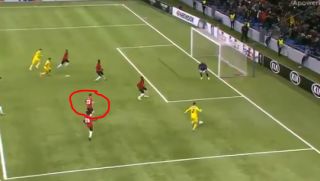 One Manchester United fan seems like he has a bit of a personal vendetta against Luke Shaw.

Take a look at this guy’s Twitter feed as he picks out Shaw as the stand-out poor performer for United as they lost to Astana in the Europa League tonight.

Ole Gunnar Solskjaer may have fielded a youthful XI, but Shaw was still one of the worst players on the pitch, it would seem.

It’s hard to argue with some of these calls, with the England international poor at both defending and bringing play forward…

Shaw once again too lazy, out of position and where exactly is he jogging into when he HAS to close down the wing man?#ASTMUN pic.twitter.com/bwqB0Vk5hk

Hits the 1st man over and over again: pic.twitter.com/SuDTyeUFz6

Look at him jogging from behind, completely unaware that his zone is undefended: pic.twitter.com/B8l0Izjzlp

Gets the ball, stops and passes it back. Like he does 1000x in the PL too: pic.twitter.com/TVUhKRcMAn

He’s sleeping in this situation which in the PL would lead 99% to a goal: pic.twitter.com/95GrvqJnZo

One imagines the former Southampton man is not going to last a lot longer at Old Trafford after the emergence of exciting youngster Brandon Williams this season.