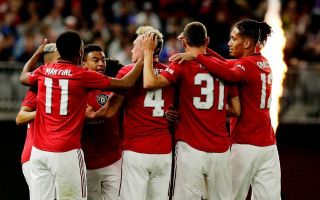 Loads of Manchester United fans are complaining about Luke Shaw as one negative from their first half against Astana.

The Red Devils have a 1-0 half time lead thanks to a fine Jesse Lingard goal from outside the box, but it’s been far from a vintage display from Ole Gunnar Solskjaer’s side.

MORE: Manchester United and Liverpool given opportunity to seal £100m transfer as early as January

In fairness, the Norwegian tactician has selected a number of young players, so it’s perhaps not too surprising that they’re lacking fluency.

Still, Man Utd supporters are perhaps justified in expecting more from a senior player like Shaw, who has looked off the pace in a rare outing for United.

It seems the England international’s Old Trafford future is in some doubt as the Telegraph claim Solskjaer has told him he’s no longer first choice at left-back.

This follows the emergence of promising youngster Brandon Williams, who really does look the superior option right now.

Luke Shaw have some shame man. Stealing a living

Shaw's days as a United player should be over after this.

Shaw should not start over Williams

Honestly think we can recoup 80% of what we paid for Shaw if we sell him in January. Just don’t play him again he’s bringing down his value every time he plays

Not seen anyone on my timeline mention Shaw's peformance this half. Despite the assist he's been very poor.

I hope that after today people finally realise that Luke Shaw is not good enough at all & we should be going into the summer market for a left back then sell Shaw on. Chong aswell, he's experienced in around the first team like Greenwood is and I've seen no improvement. #MUFC