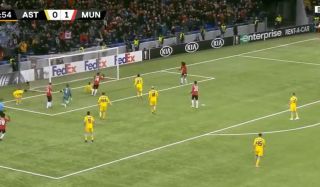 Tahith Chong has missed an absolute sitter for Manchester United, blazing over from close range when presented with an open goal.

Watch below as the Red Devils carved their way through Astana with some fine passing football, only for Chong to totally fail to apply the finishing touch.

MORE: Manchester United and Liverpool given opportunity to seal £100m transfer as early as January

Not even a minute later Astana equalise ? pic.twitter.com/zGla6jX0cL

The young Dutchman is not a regular for Man Utd but has long been considered a big prospect for the future.

However, if he cannot take glaring opportunities like this when he occasionally makes it into Ole Gunnar Solskjaer’s first-team, he is going to find it extremely difficult to forge a long-term future for himself at Old Trafford.

With the score now at 1-1, if United don’t win this game they’ll look at this as the moment they wasted their big chance to pick up all three points.