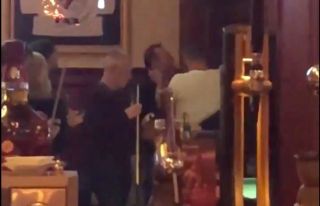 A video reportedly showing Ed Woodward receive a wet willy from a Man Utd fan in Kazakhstan has gone viral on social media.

The Red Devils are preparing to face Astana in the Europa League on Thursday as they look to secure top spot in Group L having already sealed their place in the knockout stage.

However headlines before the game were made by one fan in particular as a bizarre video circulated which is said to show United chief Woodward receive a wet willy.

Firstly, it’s pretty rank and given the fan in question looks like a grown man, the word immature comes to mind.

Woodward appears to try and shake him off initially before looking rather puzzled as to what has just happened, while of course the fan’s mate films the whole thing and goes viral with it.

The Sun have reported that it is indeed Woodward in the video, as they add that the chief executive was playing pool ahead of the game and enjoying himself with a drink before the fan ruins his outing.

Woodward has come under a lot of stick from Man Utd fans as they continue to struggle to compete, but this is surely over-stepping the line even if it is seen as a bit of harmless fun by many…

This is possibly the weirdest video you'll see today. A Man United fan went up to Ed Woodward in a bar in Kazakhstan and gave him a wet willy ??? [@CantonaManc] pic.twitter.com/L6lrDi7DNU