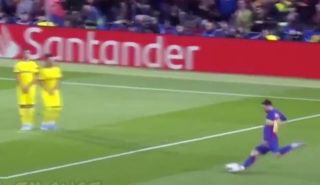 Barcelona secured a crucial 3-1 win over Dortmund in the Champions League on Wednesday night, with their attacking trident all getting on the scoresheet.

Lionel Messi, Luis Suarez and Antoine Griezmann led the way as the Catalan giants booked their spot in the knockout stage of the competition, but Messi almost added another collectors item to his goals from free-kicks.

As seen in the video below, perhaps channelling his inner-Paulo Dybala after the Juventus star scored from an impossible angle on Tuesday night in the win over Atletico Madrid, Messi tried to bend in a brilliant free-kick to add to his tally.

Unfortunately, it seems as though some things are beyond the Barcelona icon, as he could only watch on as his effort clipped the crossbar and went out of play with the Dortmund goalkeeper simply watching with his mouth open as he couldn’t do anything about it.

Messi has scored some sensational free-kicks over the years and has made it all look so easy, but sadly for him on this occasion, he couldn’t quite get it right but still produced a brilliant attempt.