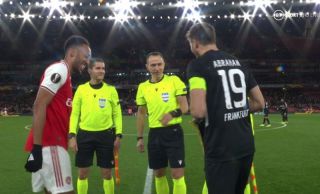 It was another miserable night for Arsenal on Thursday as they slipped to defeat against Eintracht Frankfurt in their Europa League clash at the Emirates.

The Gunners still sit top of Group F but missed the chance to secure qualification for the knockout stage after suffering a 2-1 defeat as the pressure continues to build on Unai Emery.

While they’ve fallen down to eighth spot in the Premier League and are now eight points adrift of fourth place, the Spanish tactician will need to turn their form around sooner rather than later to avoid the possible threat of being sacked.

Pierre-Emerick Aubameyang did his best to help his coach out on Thursday night as he scored Arsenal’s opener, but clearly his captain duties are still new to him as he was caught committing a blunder prior to kickoff.

As seen in the images below, the Gunners captain had to be called back over by the officials for the coin toss before the game started, with smiles all round as his mistake was quickly forgiven.

The prolific forward took over the captain’s armband from Granit Xhaka this month after his spat with the fans, but it seems as though Aubameyang still has a thing or two which he needs to learn about leading his side.

Unfortunately for him and Arsenal though, those smiles later disappeared on another disappointing night for Emery and his men as their focus now switches to Norwich City on Sunday.

Aubameyang has to be called over for coin toss after forgetting captaincy duties ?? @Aubameyang7 pic.twitter.com/HyEdR67ASY