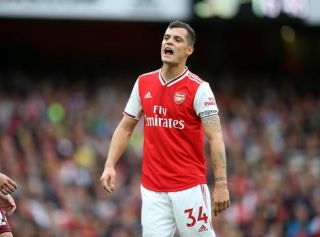 The Swiss international made his first start for the Gunners since their Premier League match against Crystal Palace during which he reacted angrily to fans booing him.

Xhaka played the entirety of the match produced a decent performance from the middle of the park but Arsenal lost 2-1 thanks to two goals from Daichi Kamada.

Following the match, Emery praised Xhaka for his performance. As quoted by Goal.com, the Arsenal manager said: “Xhaka wanted to continue playing. His match today was good and he helped the team. I am being positive but I’m also realistic and we lost against a good opponent.”

Despite their defeat, Arsenal lead their group and can qualify for the last 16 if they even manage a draw against Standard Liege

Xhaka produced a decent performance and might be in contention for a spot in the Gunners’ match against Norwich City this weekend. They need a win to narrow the gap between themselves and the top four. There’s a good chance that this match could be Emery’s last if Arsenal fail to win.