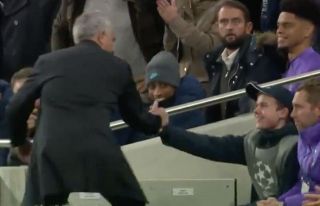 Tottenham ball boy Callum Hynes became an internet sensation on Tuesday night after he helped Jose Mourinho’s men in their win over Olympiacos.

Spurs secured a 4-2 win in their Champions League clash after battling back from 2-0 down early on, and Hynes was a key factor in their comeback.

His quick-thinking to get the ball back quickly to Serge Aurier to take a throw-in led to Harry Kane’s first goal of the night to level the scores, and it earned him a congratulatory high-five from Mourinho who acknowledged how his alertness was crucial to Spurs’ attack.

Speaking after his game-changing intervention, Hynes has revealed just how much it meant to him that Mourinho made a point of making that gesture.

“It’s all a bit surreal,” he told the club’s website, as noted by Sky Sports. “I was just doing my job and I still can’t quite believe what happened.

“I didn’t even see the goal! I was busy getting the ball that had come off and then I heard the cheer. I turned around and Harry was celebrating. I looked at the replay on the screen and watched exactly what happened.

“You can see from my smile it was just unbelievable. Jose didn’t have to do that. It was really nice of him to come over to me. It’s made my day, my life, really! I love Spurs and it was an amazing moment I’ll never forget.”

It was a crucial win for Tottenham as Mourinho made it back-to-back victories since taking charge at the club, and he’ll owe a big debt of gratitude to Hynes for helping his side see off Olympiacos in midweek.

Attention now switches to Bournemouth on Saturday, and it remains to be seen if the youngster is on duty to help out again as he’ll no doubt be in the limelight if he’s on the sidelines.