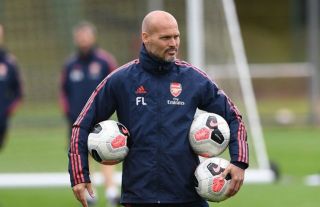 Arsenal interim head coach Freddie Ljungberg has sent a message to the club’s supporters after Unai Emery’s sacking was confirmed on Friday.

The Spaniard was dismissed by the Gunners hierarchy after a run of seven games without a win across all competitions, with Ljungberg stepping in as a temporary solution, as confirmed in the club’s statement.

Having been part of the coaching set-up at the Emirates, Ljungberg will be familiar with the players and will undoubtedly draw on the experience he gained as a player at Arsenal too as he attempts to now oversee a win over Norwich City on Sunday.

As seen in his tweet below, the Swede has sent a message to the Arsenal fans after landing his new job, and has insisted that he will ‘give everything I have to put smiles on faces again’.

Time will tell if he is able to do so with his limited experience, but ultimately after a poor run of results under Emery in recent weeks, perhaps the change on the bench will give the players an immediate lift that so often comes with a sacking, before a more permanent appointment is confirmed by the Gunners.

Ljungberg, 42, made over 200 appearances for Arsenal during his playing career, winning two Premier League titles and three FA Cups.

In turn, he’ll likely have the support of the Arsenal faithful as he prepares for his first game in charge, and they’ll be desperate to see him do well and make an immediate impact to keep them in touch with the top four.

As a result of their winless streak, the Gunners have slipped down to eighth place in the table and now sit eight points adrift of fourth spot.

However long I oversee @Arsenal for I will give everything I have to put smiles on faces again. We have a busy few weeks ahead and the team needs your support. Let’s get to work! pic.twitter.com/WdekcA4h5G