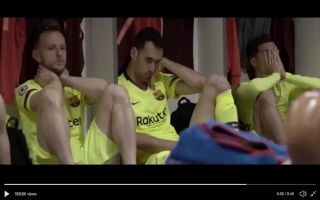 The behind-the-scenes clip is part of Rakuten’s documentary which followed the La Liga champions last season.

According to Spanish outlet Marca, the seventh episode of the documentary series will be based on Barcelona’s shortcomings in the Champions League Semi-Finals second-leg and last season’s Copa Del Rey final.

The aforementioned episode is titled ‘The eighteen-day storm’.

Barcelona’s entire squad and staff were in complete silence after they headed back to the dressing room following their 4-0 defeat to Liverpool at Anfield.

The Blaugrana went into the second-leg of the tie with a 3-0 lead, but braces from Divock Origi and Gini Wijnaldum inspired the Reds to the Champions League final.

Check out the clip below, courtesy of Rakuten:

Liverpool vs. Barcelona – the aftermath.? pic.twitter.com/Vdf37FaIy0

Wondering how the dressing room feels like after a defeat? This is Barcelona after Liverpool overturned their 3:0 lead to win the match.
Note: There's nothing wrong with your phone speakers or earpiece. pic.twitter.com/6lwjzYw9s0

The 45-second clip is complete and utter silence. Former Liverpool star Philippe Coutinho can be seen with his hands over his face after his side’s defeat.

This series looks like it’s going to be an amazing watch.