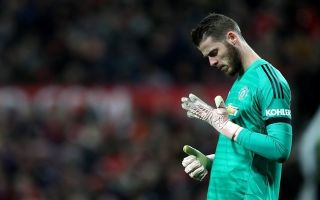 In an interview with Sky Sports, Manchester United superstar David de Gea has suggested that the Red Devils’ ‘lack of quality’ in ‘certain areas’ could be the reasoning behind the side’s inconsistent form so far this season.

Ole Gunnar Solskjaer’s side are currently 10th in the Premier League table, the side’s mixed form has dented hopes of a potential top four finish this season.

The Red Devils struggled against promoted side Sheffield United last weekend and it’s clear to see that the side are still some time away from re-establishing themselves as a real force to be reckoned with in England.

De Gea was recently handed a new marquee contract by the Red Devils, the Guardian report that the Spaniard’s new four-year deal will net him a staggering £350,000-a-week.

It doesn’t look as though Solskjaer will lead the Red Devils to a top four finish this season.

Here’s what the shot-stopper had to say on United’s inconsistent form:

“At the moment the team is not playing so well.”

“We’re giving it everything, we’re trying to get those big wins that can put us high up in the table, but the truth is at the moment we’re not consistent enough, there’s much to train and much to improve.

“I don’t think it’s through any lack of effort, the boys are leaving everything out on the field in training and games. You could point maybe to a lack of quality in certain areas, but certainly not a lack of fight.”

Solskjaer has handed many of United’s top prospects a chance to shine this season and many have impressed.

Should the Red Devils look to fill their ‘lack of quality’ with talented youngsters or should they reinforce their squad in upcoming transfer windows?

Given United’s recent track record with signings, it may be wise for the Manchester outfit to solve their apparent problems in-house.

Video: “Could dominate a game on his own” – Chelsea fans will love Thierry Henry’s tribute to Blues legend
More Stories David de Gea