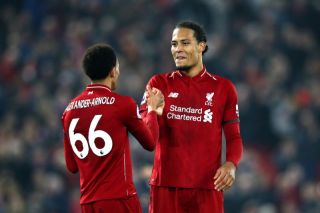 Liverpool secured a 2-1 win over Brighton at Anfield on Saturday, with both goals coming from combined play between a defensive pairing.

After Man City slipped up earlier in the day at Newcastle Utd, the Merseyside giants had an opportunity to stretch their lead over their title rivals to 11 points.

Although it wasn’t entirely convincing, they didn’t disappoint as they saw off Brighton and held on for victory despite Alisson receiving a red card in the second half.

In turn, Liverpool continue to put themselves in a commanding position in the title race as they move clear at the top, and their success dating back to last season involves two individuals making a crucial impact at both ends of the pitch.

There is no doubt that Virgil van Dijk and Trent Alexander-Arnold have had a huge influence in shoring things up defensively, with both men featuring heavily last season as Liverpool conceded just 22 goals in 38 league games to give them the best defensive record in the top flight.

They haven’t been as solid defensively this season after conceding 12 goals in 14 games thus far, but it’s still a key strength of theirs.

However, based on the tweet below from Opta Joe, both Van Dijk and Alexander-Arnold are making major impacts at the other end of the pitch too with the Dutchman scoring more goals than any other Premier League defender dating back to the start of last season with seven.

As for his teammate, he has provided more assists than any other defender in the top flight with 17, and as they combined brilliantly on Saturday to secure three crucial points for Liverpool in a game where their attacking stars couldn’t find a breakthrough, it’s the contributions from across the squad which could help them get over the line come May as they aim to end their wait for a league title.