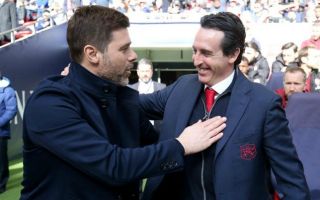 Those close to Mauricio Pochettino have reportedly suggested that the former Tottenham boss is “ruling nothing out” amid links with the Arsenal job.

The 47-year-old was sacked by Spurs last week and was quickly replaced by Jose Mourinho, and so he will now weigh up his options and make a decision on his future.

Time will tell if he seeks an immediate return to coaching or bides his time and has a break before taking his next job, but as seen in The Independent reporter Miguel Delaney’s tweet below, Pochettino is said to be “ruling nothing out” as per those close to him as he has been linked with the Arsenal job this week.

It comes after Unai Emery was sacked on Friday, and so the Gunners will be in the market for a new boss with Pochettino undoubtedly ticking plenty of the right boxes after the job he did on the other side of north London.

However, Delaney goes on to concede that it’s questionable as to whether or not Pochettino would risk tarnishing his reputation with Tottenham fans by taking the Arsenal job, and so it remains to be seen whether or not that’s something on his radar.

It seems as though it is certainly something that Arsenal would consider, with The Athletic’s David Ornstein reporting that the Argentine tactician is seen as a ‘credible option’ by the Gunners.

Time will tell if the pieces fall into place for the shock move to materialise, but from his work with the young players in the Tottenham squad to his ability to turn Spurs into a top-four side and leading their run to the Champions League final last year while working without significant funds to strengthen his squad, he would seem like an ideal appointment for Arsenal if he can be convinced to take the job.

Re Arsenal, a few who know Poch maintain he is “ruling nothing out”, and is a bit put out by how things finished with Spurs.

Whether that actually extends to actually crossing the divide – and so infuriating fans he has a great relationship with – is another matter.