It’s always dreadful when you see a promising career being derailed. Sometimes it can be hard to have sympathy when it’s self-inflicted issues that cause it to happen, but it’s heartbreaking when injuries stop a player from reaching their potential.

Ousmane Dembele is currently caught as the fourth choice forward in a team who plays with three. It means he should get some chances, but he needs to stay fit and be around to take those chances when they come up.

READ MORE: Confirmed Barcelona squad vs Atletico Madrid: These fans want return for midfield ace and stalwart to be dropped

He’s had an ongoing issue with injuries since moving to Spain and The BBC reported he’s set to miss another 10 weeks thanks to a thigh injury.

The biggest problem is this isn’t a one-off. This graphic from BR football shows the injuries he’s suffered and the length he’s been kept out for: 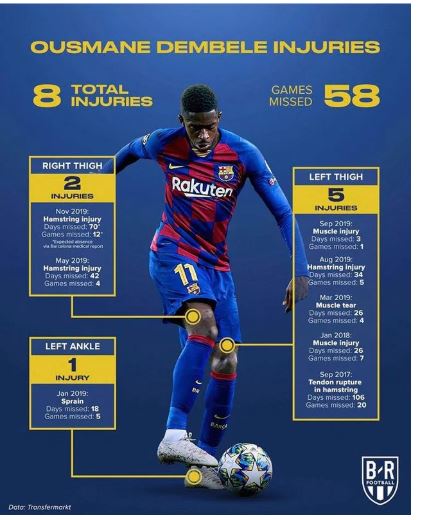 It’s not just the amount of time that he’s been out for that’s concerning, it’s the number of recurring injuries on his legs. His pace and explosive ability are a huge part of his game, so you have to think that this can only have a negative impact on his body and his abilities in the long-term.

It will also prevent him from actually playing as well. Barcelona need players they can rely on, so if he’s constantly missing when they need him then he will struggle to nail down a first team spot going forward.

This latest injury also means he will be unavailable for the clash with Real Madrid in December. Let’s hope he manages to stay fit and fulfil the potential he’s shown in his career so far.