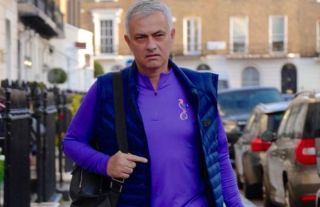 Jose Mourinho has insisted that he has no intention of moving from the club any time soon as he paid tribute to the infrastructure in place at Spurs.

The Portuguese tactician was appointed as Mauricio Pochettino’s successor last week, and he has since registered two wins in two games thus far.

Having seen off West Ham United and Olympiacos, Mourinho will hope his side can follow that up against Bournemouth on Saturday, and he has busy praising the club this week and continuing his charm offensive as he appears delighted to have landed the Tottenham job.

“I’m so happy here that I couldn’t even think about the possibility to go to another place. You can put now in front of me any club in the world, I would not move,” he is quoted as saying by The Mirror. “The facilities in this one are the best I’ve ever seen and I’ve been in big clubs. It’s not like I arrive here from small clubs and think: ‘Wow.’

“It’s not like I’ve been in bad conditions but here it’s fantastic. The stadium is brand new and is the best stadium in the world.

“You know how much I like the Premier League, that’s the first point. The second point is this club. You know what the club is showing me.

“The vision they have for the future and everything they are as a club in terms of structure organisation, feelings, a big club but with a concept of a family, working together with people.”

Time will tell if all parties concerned remain as happy moving forward, as Mourinho will be expected to lead Tottenham back into the top four in the Premier League at least, while also trying to end their wait for major trophies.

Further, with chairman Daniel Levy known for being relatively tight with the purse strings coupled with Mourinho’s past of spending big at every club he has been at, it remains to be seen whether or not that proves to be a key issue between the pair if things don’t go to plan.

In turn, there are a lot of boxes that still need to be ticked, but it’s been a positive start for Mourinho at Tottenham and it sounds as though he’s delighted in his current job and isn’t thinking about jobs that have since become available, and those which could become vacant in the more immediate future.