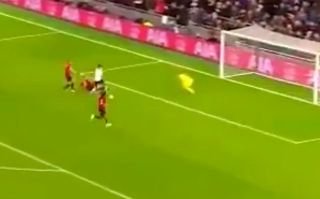 Jose Mourinho’s impact has been positive for Tottenham so far, and particularly for Dele Alli who has been in fine form since his arrival.

The 56-year-old was appointed as Mauricio Pochettino’s successor last week, and has already guided his new side to back-to-back wins.

Spurs were aiming for a third straight victory under Mourinho against Bournemouth on Saturday, and Alli led their charge as they went 2-0 up just after half-time.

As seen in the video below, the England international doubled their lead in style too as after breaking in behind the Bournemouth defence after a brilliant pass from Toby Alderweireld, which was similar to the first goal, Alli kept his composure and produced a wonderful dinked finish over the goalkeeper.

While Tottenham haven’t been entirely defensively sound under Mourinho thus far, he’s got them back firing in front of goal at least with Alli’s second making that nine goals and counting in under three full games in charge.

A win would be crucial for Spurs too as they continue to try and climb the Premier League table and get themselves back in contention for a top-four finish this season.

TOTTENHAM OVER THE TOP AGAIN pic.twitter.com/b6wPoESOCB