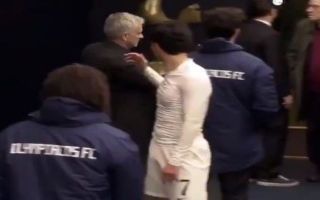 We’re still in that honeymoon phase with Jose Mourinho where the press can’t get enough of him and players will do all they can to get into his good books.

Fast forward a few months and it won’t shock anyone if we are treated to prickly press conferences and players making passive aggressive comments once things start to go wrong.

It looks like Son is one player who is desperate for some attention from his manager, as evidenced by this video following the Olympiacos game:

Mourinho blatantly airing Son, then acting like he didn’t see him is vintage Jose ?? pic.twitter.com/dy7rq130iT

He takes at least three attempts to get any kind of recognition from Mourinho. It’s likely that Jose is fully aware of Son here and is using it as an opportunity for some kind of power play, but it’s pretty cringey viewing.