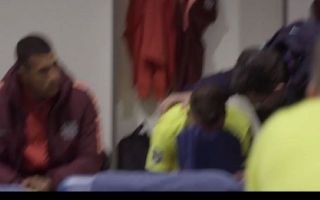 It probably won’t feel like it when you support one of the teams involved, but sometimes you can just see something will happen in a football game and there’s nothing anybody can do to stop it.

It’s well known that Barcelona came to Anfield last season with a comfortable lead from the first leg of the Champions League semi final, and most people thought they would stroll their way into the final.

Then Liverpool got an early goal and the whole momentum of the tie swung. It was only 1-0 at half time, but his footage suggests Jordi Alba knew what was coming:

Jordi Alba at half time ..when you know you have to endure another 45 mins of pure hell and misery #LFC ?? pic.twitter.com/hSAqdaLwj5

Two quick fire Wijnaldum goals and some quick thinking from a corner was enough to completely turn it on it’s head in the second half, and Barca were powerless to stop it.

It seems that this Barca documentary was supposed to be for their own fans, but it’s really just giving some great content for Liverpool fans to watch instead.