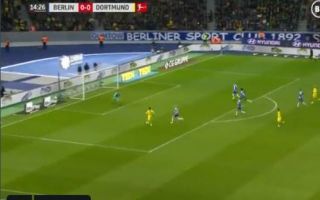 This is the first time we’ve really seen Jadon Sancho face some adversity, and it looks like he’s responding to it brilliantly.

The Sun recently reported that he felt humiliated at Borussia Dortmund as he was made a scapegoat for their loss to Borussia Dortmund, while he was also left out of their starting XI to face Barcelona during the week.

READ MORE: Video: Jonathan Tah takes one for the team with straight red card for tackle on Coutinho vs Bayern Munich

He scored when he came off the bench at the Nou Camp and he impressed again by scoring this nice goal after being restored to the starting line up today:

That move to stay onside ? pic.twitter.com/CkXNDBCiwn

There’s no doubt the past few weeks have been a big test for him, so his ability to fight back and make a decisive contribution says a lot about his strength of character.

It will probably impress any clubs who may be interested in him too..