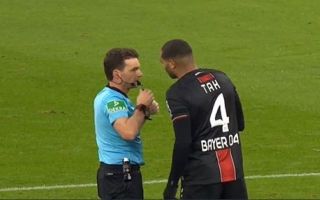 If ever you wanted an example of taking one for the team, this could be it. Bayer Leverkusen were 2-1 up away to Bayern Munich with ten minutes to go, Philippe Coutinho was in on goal and Jonathan Tah stepped in to wipe him out.

It meant that he was sent off, but his team went on to win the game. Obviously there’s no guarentee that the Barcelona loanee would scored, but you would fancy his chances, especially when he had a simple square ball to give Robert Lewandowski an open goal as an option.

If there is such a thing as a good foul, this was it from Jonathan Tah:

He will face a ban after getting sent off, but his teammates will probably be very grateful for his contributon here. He will just be hoping the team don’t suffer too much without him, or the sacrifice may not be worth it.