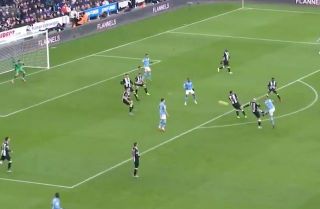 Man City were at risk of dropping crucial points at Newcastle Utd on Saturday, but up stepped Kevin De Bruyne to put them back in the lead in the latter stages.

Raheem Sterling had given the visitors the lead in the first-half, only to see Jetro Willems cancel out his effort just minutes later.

The reigning Premier League champions toiled thereafter as they struggled to get themselves going, but such is the quality in this side, they have individuals capable of producing magical moments.

On this occasion, it was De Bruyne who produced it, and as seen in the video below, it was undoubtedly a special effort as he hammered the ball into the back of the net from distance with a sweetly-struck attempt.

However, City clearly didn’t learn their lesson from the first half though, as Jonjo Shelvey scored just minutes later to equalise for the hosts again and peg them back for a second time.

Dropping points at Newcastle would be a hammer blow to their hopes of defending their crown, with Liverpool nine points ahead prior to kickoff on Saturday.

An absolute rocket to put Manchester City ahead!

KEVIN DE BRUYNE 's goal is one of the best this weekend pic.twitter.com/h3kQtxCNmX