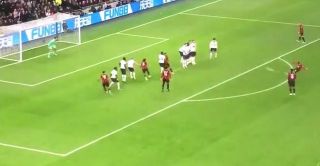 Harry Wilson continues to impress on his loan spell at Bournemouth from Liverpool this season, as he showed his class from set-pieces again at Tottenham on Saturday.

The 22-year-old doubled his tally late on to make it six goals in 14 Premier League games so far this season, and so he is arguably sending a message to Jurgen Klopp with regards to his Liverpool future when his season-long temporary stay with Bournemouth ends.

For now though, he’s continuing to focus on making a positive impact for Eddie Howe’s side, and although he couldn’t prevent them from slipping to a 3-2 defeat to Spurs on Saturday, he did produce arguably the moment of the encounter.

As seen in the video below, as he has shown on countless occasions, he is a huge threat from set-pieces in dangerous positions, and he produced another stellar effort in north London as he curled a classy effort into the back of the net.

As he continues to show that he can deliver in the Premier League after impressing for Derby County last season, it could lead to an opportunity with Liverpool in the future.