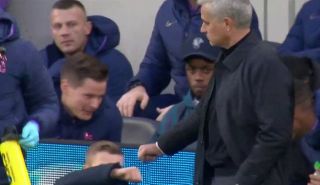 Tottenham took the lead against Bournemouth on Saturday through Dele Alli, and Jose Mourinho was clearly delighted with it.

Spurs have won back-to-back games since the Portuguese tactician replaced Mauricio Pochettino at the helm last week, and they’ll be looking to continue their winning run to build momentum and climb the Premier League table.

Things started well on Saturday as Alli broke the deadlock to give them the lead at home against Bournemouth, and Mourinho was eager to celebrate in what is becoming a familiar way.

After some brilliant quick-thinking from a Tottenham ball boy helped Spurs draw level against Olympiacos in midweek, Mourinho congratulated him for playing such a key role in the goal with the clip going viral.

As seen in the video below, the Spurs boss was back to his old tricks again on Saturday as he opted to fist-bump the youngster again after Alli broke the deadlock following some lovely build-up play from Tottenham to carve Bournemouth open.

The young man is enjoying the time of his life it seems and he may well be bringing Tottenham and Mourinho some good luck!