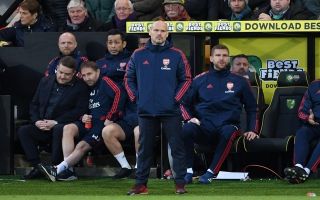 According to Opta, following Arsenal’s 2-2 draw with Norwich City this afternoon, the Gunners are now on their longest winless streak in the Premier League since December 1994.

Arsenal’s dismal form over the last couple of months saw Unai Emery relieved of his duties on Friday morning, club legend Freddie Ljungberg has taken caretaker charge of the Gunners.

6 – Arsenal are without a win in their last six Premier League games (D4 L2); this is their longest such streak within a single season since December 1994 under George Graham. Melancholy. pic.twitter.com/qDlSLXJOHN

Some fans slammed Arsenal’s defending in the lead up to Teemu Pukki’s opener for the Canaries.

Despite being the only player in a threatening attacking position, the defence stood off the talisman and were made to pay.

On the stroke of halftime, Calum Chambers was caught out of position which allowed Onel Hernandez to burst forward and tee up Todd Cantwell’s goal.

Pierre-Emerick Aubameyang actually bagged a brace for the Emirates outfit, but once again the Gabonese star’s efforts weren’t enough to seal a win for the Gunners.

Arsenal should focus the majority of their attention on attempting to steady the team’s back line, the side will struggle to get anywhere this season if they can’t solve their glaring defensive issues.