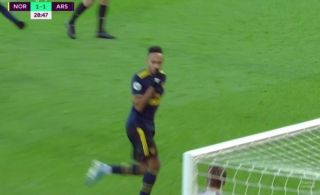 The Gunners striker had to retake his penalty at Carrow Road, with Krul appearing to try and psyche him out with mind games a few times on both spot kicks.

Eventually, Aubameyang found the back of the net and took a little moment to shush Krul as he wheeled away to celebrate.

It’s Freddie Ljungberg’s first game in charge of this struggling Arsenal side, and it’s not exactly going brilliantly as they find themselves 2-1 down at the time of writing, but Aubameyang has his name on the score sheet and will be hoping to add another.