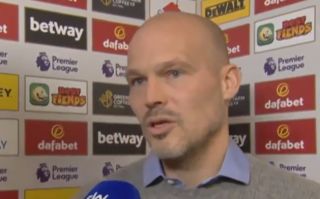 Arsenal’s caretaker manager Freddie Ljungberg has made a surprise claim ahead of his first game in charge of the Gunners.

The Swedish coach was named as the temporary replacement for Unai Emery this week and is preparing to lead the team out against Norwich City this afternoon.

Speaking before the match in the video with Sky Sports below, Ljungberg made the surprise point of mentioning Reiss Nelson, who didn’t make his squad.

The youngster has long looked a big prospect but has seen his development stall slightly in recent times, though Ljungberg clearly rates him highly.

He said it was a tough choice leaving Nelson out today as he feels he is “the future of this club”, which is some praise.

Fans will hope Ljungberg has some decent insight on the 19-year-old after his various stints working at youth level at Arsenal, though it does beg the question as to why he didn’t even find space for him on the bench today.