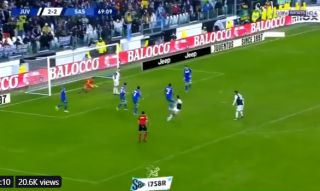 Juventus superstar Cristiano Ronaldo is one of the best in the world and one of the greatest ever to play the beautiful game.

However, as he’s shown in this bizarre moment in the video clip below, even the best can have an off-day from time to time…

Watch as Ronaldo’s positioning and poaching instincts are not at their usual high standards as he simply stands in the way of a Paulo Dybala shot that looked like it was heading in.

As a result, the Portugal international is now being trolled by a number of fans on Twitter as they praise his great defending, with some even joking he’s better than Liverpool star Virgil van Dijk!

Cristiano Ronaldo is a better defender than Van Dijk ? pic.twitter.com/C9musjfvGy

Cristiano Ronaldo the best defender in the world when he wants to be.
Cristiano for the ballond'or#BallonDor https://t.co/7Ia3Jq33P4