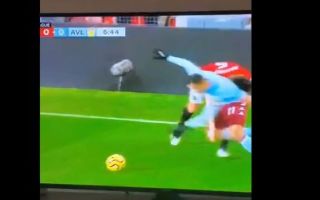 It would be harsh to say that Harry Maguire hasn’t improved the Man United back line at all, but he certainly hasn’t been as good as a lot of fans would’ve hoped.

The BBC reported that Maguire was signed for £80m from Leicester City, so there were immediate comparisons with Virgil van Dijk and the impact he had at Liverpool.

Unfortunately Maguire has looked cumbersome and has often struggled. This clip against Aston Villa provides the latest example:

It only looks worse when you consider he replaced Chris Smalling, only he’s showing some great form at Roma and certainly doesn’t look any worse than Maguire.

It’s been a season of two steps forward, one step back for Man United and Ole Gunnar Solskjaer so far.