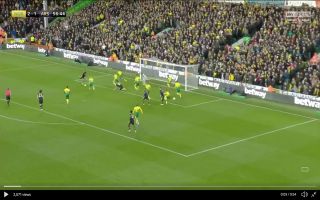 Pierre-Emerick showed off his natural goalscoring instinct to drew Arsenal level for the second time in this afternoon’s clash against Norwich City.

Superstar playmaker Mesut Ozil whipped a dangerous corner into the box, after Shkodran Mustafi’s effort was blocked – Aubameyang cleaned up by getting to the rebound first and firing the ball into the back of the net.

Aubameyang also equalised for the Gunners earlier in the game with a controversial penalty.

Check out the Gabon star’s second goal of the afternoon below:

Aubameyang is now behind only Leicester talisman Jamie Vardy in the Premier League’s scoring charts with 10 goals so far this season.