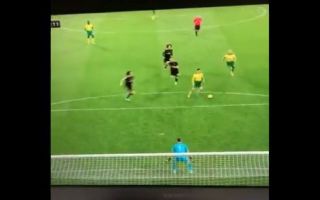 For all the attention that has been directed at Arsenal this season, it’s rare to see Bernd Leno in the spotlight.

There’s often been some criticism aimed at the defence, but Leno has mostly been ignored when it’s come to pointing out Arsenal’s problems.

READ MORE: “By far the worst player on the pitch” These Arsenal fans react to one player’s performance in the first half vs Norwich

The fact that they are still in the game with Norwich this afternoon is largely down to the German’s brilliance in goal. Moments after Aubameyang equalised for a second time, he produced this incredible save to deny Kenny McLean:

A parry which ended up saving Arsenal from defeat, from Bernd Leno ?#OptusSport #PL #NORARS pic.twitter.com/sgBEeoKo3u

There were two huge moments of hesitation in the Arsenal defence before the chance, one to allow Norwich to close them down and a second to allow the Scotsman to run through on goal.

Whatever the result is today, there’s some serious work needed on this Arsenal team.