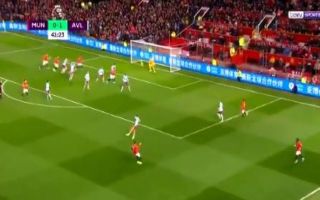 It’s incredible to think that Man United started the game in the bottom half of the league, but a win could push them as high as fifth.

It was looking like another one of those days as Aston Villa took the lead at Old Trafford, but Marcus Rashford has continued his fine run of form and grabbed the equaliser.

The shape on the cross from Andreas Pereira is lovely and Rashford is left with the simple task of guiding the header into the net:

He went through a dry spell earlier in the season, but has really picked it up lately and this shows how good his recent form has been:

Getting the goal on half time could be a huge boost for Ole Gunnar Solskjaer and his men, they will be hoping to improve in the second half and grab the win that shoots them up the table.

It looks like the goal may eventually be credited to Tom Heaton as an own goal, but Rashford certainly claimed it!:

After review, the Goal Accreditation Panel have awarded Man Utd’s 1st goal as an OWN GOAL to Heaton. Rashford is therefore awarded the assist#MUNAVL #FPL https://t.co/VHqnk4zczc