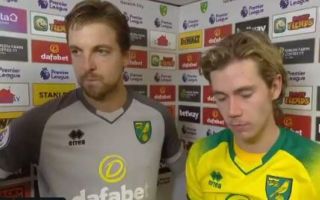 For a day that promised to be the turning point for Arsenal this season, it appeared to be much of the same.

The team struggled to assert their authority over Norwich and had Bernd Leno to thank for ensuring they didn’t lose the game. The most contentious moment of the game came when VAR ruled they could take their penalty again after Aubameyang missed.

There were some afters between Tim Krul and some of the Arsenal players, particularly Mesut Ozil, which he talked about in his interview with Sky Sports after the game:

?”I said to him you are lucky” pic.twitter.com/9Jk0AsMvxP

Krul does have a point about Arsenal being lucky there, it’s incredibly rare that you see a penalty being taken again after encroachment, so they got a huge break.

It will be interesting to see how Arsenal fare once Freddie Ljungberg gets some time to work with his players in training, the fans will certainly be hoping it’s an improvement on today.