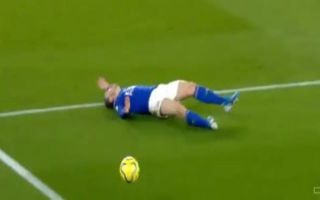 It’s probably a sign of how badly things have gone with VAR when everyone is so astonished when it’s managed to correctly overturn a decision.

Leicester City were originally awarded a penalty as Ben Chilwell went down at the edge of the box, only for the replay to show there was no contact and the decision was overturned. It’s interesting that Chilwell wasn’t shown a yellow card for diving instead, but we can’t get greedy in wanting the officials to get everything correct.

READ MORE: Video: VAR strikes twice to ensure Arsenal are gifted a way back into the game vs Norwich

Leicester fans will probably argue that he was anticipating contact, but you can clearly see there’s no contact:

NO PENALTY ? Leicester are awarded a penalty for a trip on Chilwell but VAR rules there was no foul. #EFC #LCFC #LEIEVE pic.twitter.com/rnhrbjTVDP

How to go from getting a penalty to not having one – courtesy of a VAR check!

Were the VAR officials right to chop this one off for a “clear and obvious error”?

Chilwell has certainly taken some heat on Twitter because of the way he went down. These fans have gone as far as to say he’s a cheat:

Chilwell is a cheat #LEIEVE

What a cheat chilwell is. VAR finally helps us. #LEIEVE

This week I have read so many comments about Sadio Mane diving and after just seeing Chilwell blatantly diving to try cheat a decision for a penalty I ask why wasn’t he booked. YNWA

Why isn’t Chilwell being booked then? Diving cheat

Amazed VAR finally called something correctly. Should have book Chilwell too, cheat.

Leicester went into the break 1-0 down at home to Everton after missing out on the spot kick. Brendan Rodgers has been given a lot of credit for his work so far this season, but it’s started to feel like the expectations have risen for his side going into this game.

Many fans probably thought this would be a routine home win against a struggling Everton side. There’s still plenty of time for The Foxes to turn things round, but they need at least one goal if they want to finish the evening second in the table.