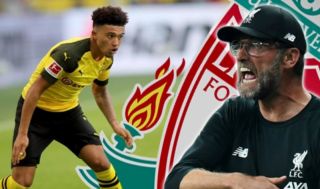 In huge news breaking this afternoon, trusted journalist Jan Aage Fjortoft claims he’s heard from a reliable source in Germany that Liverpool and Jurgen Klopp look the most likely to win the race for Sancho.

He adds in the tweet below that the England international could be on the move as early as this January, which has also previously been suggested elsewhere.

MORE: Liverpool fans urged to sing the name of one star player more

It remains to be seen how accurate this will prove to be after so much speculation surrounding Sancho since his breakthrough in the Bundesliga, but it sounds increasingly like things could be about to get very exciting for Liverpool.

The Independent recently linked the 19-year-old with LFC and rivals Manchester United, stating he could cost around £100million, with his club increasingly open to letting him go in the middle of the season.

Liverpool don’t exactly look desperate for new signings in attack, but it’s hard to turn down an opportunity like this for one of the finest young players in the world.

Jadon Sancho is being strongly linked with a transfer to Liverpool

Sancho has been a joy to watch in his time with Dortmund, though, as noted by the Independent, his relationship with the club has soured this season, with a number of top European sides also interested in his potential availability.

Klopp will no doubt hope to revive his career at Anfield if he does manage to sign him, but this would be a huge blow for Man Utd.

Sancho looks exactly the type of signing the Red Devils need right now, with their attack struggling for some time, and with Ole Gunnar Solskjaer surely in need of more investment in long-term star quality players like this.