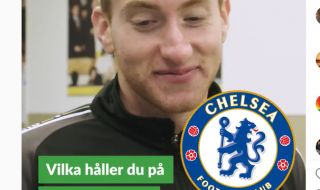 Dejan Kulusevski has revealed he’s a Chelsea fan in this video clip below, in what could be a blow for the likes of Manchester United and Arsenal.

The in-form Parma starlet is enjoying a fine season and could well be on his way to a bigger club sooner rather than later if he carries on performing like this.

The 19-year-old has three goals and five assists from midfield so far this season and the Sun have linked him with both Man Utd and Arsenal.

It remains to be seen if Chelsea might be tempted to join the running at any point, but this elite youngster looks like he could strengthen most top clubs.

United and Arsenal probably need him more right now after their poor starts to the season, with both squads looking light of quality in midfield.

CFC, meanwhile, could do well to add another big prospect to this exciting youthful squad put together by Frank Lampard.