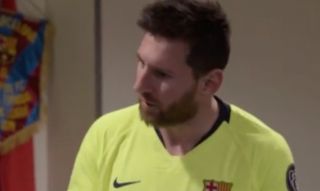 Lionel Messi’s words to Barcelona players before their crushing 4-0 defeat away to Liverpool last season have finally been revealed.

A documentary on the Catalan giants shows just how badly the result at Anfield in the Champions League semi-final affected their players, and also sheds some light on Messi’s warning to them beforehand.

MORE: Liverpool fans urged to sing the name of one star player more

In case you’ve forgotten, Barcelona were 3-0 up on aggregate from the first leg at the Nou Camp, before two goals each from Divock Origi and Georginio Wijnaldum saw them crash out in the second leg.

Barca suffered a similar shock in the quarter-final against Roma the previous year, and Messi brought this up in the dressing room before the game at LFC.

“Come on guys, remember Rome was our fault, nobody else’s, don’t let the same thing happen,” he said, as quoted by the Daily Mirror.

“That was our fault, we can’t miss this opportunity.

“Come on guys, let’s take that one little step.”

Barcelona last won the Champions League in 2014/15, but for a club of their size and ambition they’ve massively under-achieved in the competition since then.