The Premier League team of the week has landed, with Garth Crooks selecting his best XI from the weekend’s action.

It looked like another potentially decisive season in the Premier League title race as Liverpool won yet again, while Manchester City could only draw at Newcastle to fall eleven points behind the league leaders. As such it’s not too surprising to see influential Reds duo Virgil van Dijk and Trent Alexander-Arnold among the pick of the weekend’s stars.

Crooks still found room for one City player, though, with Kevin De Bruyne deservedly in after scoring a stunning goal at St James’ Park.

No Newcastle players managed to gain places in Crooks’ XI despite their efforts in a 2-2 draw, but West Ham duo David Martin and Aaron Cresswell got in after the Hammers’ surprise 1-0 win away to Chelsea.

Aston Villa’s Jack Grealish also gets in for his fine performance in an impressive draw away to Manchester United, as does Pierre-Emerick Aubameyang as plucky Arsenal fought back to take a well-earned point away to fellow strugglers Norwich. Nice to see the smaller clubs represented, eh?

It’s also nice to see a rejuvenated Dele Alli make it in, with Tottenham certainly looking improved since replacing Mauricio Pochettino with Jose Mourinho. Imagine telling that to a Man Utd fan a year ago.

Here’s Crooks’ team of the week in full, courtesy of BBC Sport… 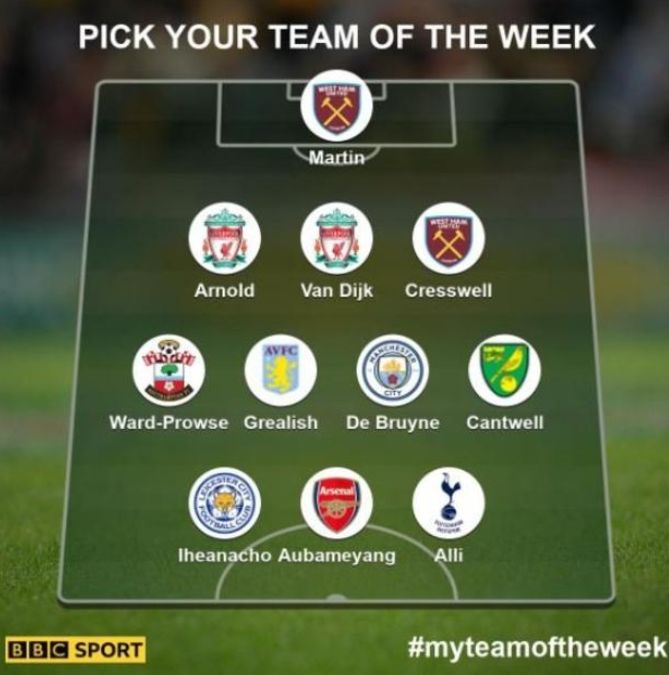