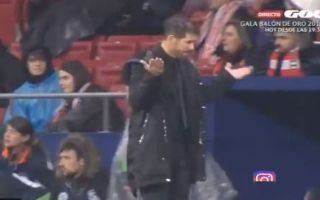 If there’s one man in world football that you wouldn’t expect to see an admirable act of sportsmanship from, it’s Diego Simeone.

Both his managerial and playing career are littered with examples of him looking to stretch the rules as much as possible, so it’s nice to see him show some admiration for the Lionel Messi.

In fairness, he probably knows by now that it’s almost impossible to stop Messi. This reaction to his goal yesterday suggests he’s stopped trying to fight it and is just willing to accept his brilliance:

You can’t stop him. Can only applaud him ?pic.twitter.com/EuXXYnWoqj

Messi’s late strike was enough to return Barcelona to the top of table for now, but they do face Real Madrid later in the month. That game could be some spectacle with both sides equal on points.