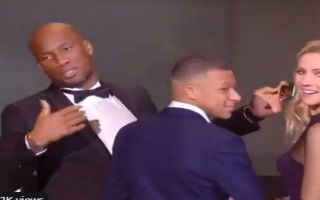 This certainly seems like a story that nobody saw coming. Ten years ago Chelsea were knocked out of the Champions League to Barcelona after some questionable decisions, which led to the infamous Drogba outburst in saying it was ” a f*cking disgrace”

That moment will always be funny for the immediate reaction from Richard Keys as if it was one of the worst things he’s ever heard, clearly he hadn’t listened to some of his own ramblings.

Tonight it emerged that Didier Drogba has been due to take a photo with a young fan after the game, but his anger took over and he refused the photo. It turns out that kid was Kylian Mbappe:

Great anecdote: Didier Drogba says he refused to take a photo with a boy that he had promised his friend to take a picture with in 2009 after Chelsea’s UCL semi-final with Barcelona. But because of the “disgrace” refereeing, Drogba ended up refusing. That boy was Kylian Mbappé.

This led to a brilliant moment at tonight’s Ballon d’Or ceremony where Drogba tried to make up for that by having a picture taken with the PSG star tonight:

EVERYBODY PLEASE STAND UP! ??? #ballondor pic.twitter.com/IKzPXRQDGS

It does make you wonder where the next story like this will come from – perhaps the Spurs ball boy will go on to become the next big thing in a few years?