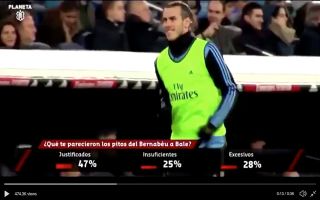 A video has emerged of Gareth Bale smiling and laughing whilst being heavily booed by some Real Madrid fans during the side’s win against Real Sociedad at their last La Liga home game.

The Welshman began to warm up on the sidelines and boos from the crowd took over the stadium, despite all this the winger managed to keep a smile on his face.

It’s great to see the superstar isn’t being affected by the abuse that’s being hurled his way.

Bale has been targeted by some fans since brandishing a banner that aimed a dig at Madrid whilst celebrating Wales’ qualification for Euro 2020.

The flag read: “Wales, Golf, Madrid… In that order” – a reference to criticism that’s come his way about playing too much golf in Spain.

Check out the moment below:

Look at Gareth Bale’s reaction as he heard the Bernabéu crowd boo’s him !

Given that Bale’s goals in two of Madrid’s recent Champions League finals proved to be decisive, we think that the 30-year-old should be treated far better by fans – regardless of some of the jibes he’s made towards the club.