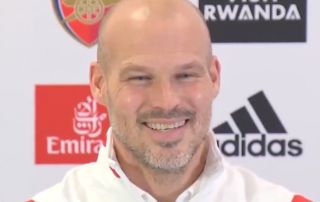 Arsenal caretaker manager Freddie Ljungberg has responded to a dig from pundit Paul Scholes over not wearing a suit for his first game in charge of the club.

The Swede got off to a tricky start with the Gunners as they drew 2-2 at Norwich City at the weekend, but Scholes had a slightly bizarre criticism to make, and it didn’t relate to the team’s performance.

"The suit was at the dry cleaners…" ?

Freddie Ljungberg responds to Paul Scholes who questioned his attire during Arsenal's draw with Norwich!

Scholes was quoted by the Express and others as hitting out at Ljungberg for not showing more pride by wearing a suit for his first game as Arsenal boss, but the 42-year-old rather laughed it off in the video clip above.

Speaking to reporters at a press conference, Ljungberg said his suit was at at the dry cleaners and that he’ll decide what he wears on matchday.