We’ve probably all been foolish enough to shout at a game or take to social media to say we could do a better job than certain players or claim we could get the better of them – rarely does anyone then get the chance to back up those words.

In the latest edition of “the internet never forgets” Port Vale striker Tom Pope might regret a certain tweet he made about Man City defender John Stones. Port Vale have been drawn away to Man City in the FA Cup, so we will get a chance to see how true these claims are: 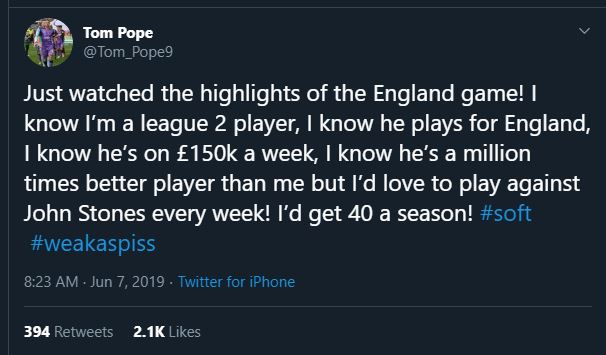 Just incase that wasn’t enough to set him up for a fall, Pope also produced this follow up effort shortly after:

You have to think that he wouldn’t be given the chance to actually prove this, but the magic of the FA Cup has given him a golden chance to go to The Etihad and show just how good he is against an England international.

Surely City will run out easy winners, but just imagine if Port Vale could pull of the shock and Pope got the winner. He would be fully entitled to gloat after that.

If Stones plays, then Pep Guardiola won’t need to do a lot of digging to find some motivation for him.