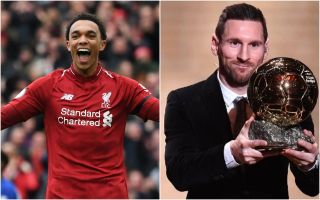 Liverpool fans may have been a little disappointed last night as their star player Virgil van Dijk missed out to Lionel Messi for this year’s Ballon d’Or prize.

While many would argue Van Dijk had the more influential year after playing such a huge role in the Reds’ Champions League success last season, there can be little argument that, on pure talent alone, Messi remains the best footballer on the planet, and probably by some distance.

The Barcelona superstar was, however, on the losing side as Liverpool thrashed the Catalan giants 4-0 at Anfield in that memorable semi-final second leg last term.

Messi’s magic had given Barca a 3-0 lead in the first leg at the Nou Camp, but Liverpool produced one of the greatest performances in their recent history to stage an incredible comeback in the return fixture and go through to the final.

So while Messi picked up his 6th Ballon d’Or award last night, LFC right-back Trent Alexander-Arnold decided to relive his big moment from that win over Barcelona, perhaps as a little reminder to the Argentine superstar…

“So, it was Barca at home and we got this corner…” pic.twitter.com/itYca25kuv

As you can see in the tweet above, Alexander-Arnold posted a picture of himself chatting to Andrew Robertson and Alex Oxlade-Chamberlain, with the caption: “So, it was Barca at home and we got this corner…”

The England international’s quick thinking from a corner led to the crucial fourth goal from Divock Origi, and sent Messi and co. crashing out of Europe in dramatic fashion.

All in all, Liverpool fans wouldn’t swap that for all the Ballon d’Or awards in the world, with individual player awards not really matching up to team successes.

Alexander-Arnold’s tweet has around 21,000 retweets at the time of writing, so it’s fair to say it seems loads of Reds fans absolutely loved it.

Don’t think he is tbh pic.twitter.com/ZQ2ExX8kfU