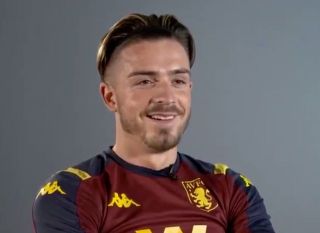 Aston Villa ace Jack Grealish recently admitted that they adopt a similar tactical model to Liverpool, and has now joked the Reds are incapable of being beaten.

Speaking after his side’s win over Newcastle United last month, the 24-year-old revealed that boss Dean Smith wants him to play as a third striker on the left wing, similar to how Jurgen Klopp sets out his attacking trident at Anfield.

He has now joked that Liverpool are seemingly the only side in the Premier League at the moment who are incapable of being beaten, as seen in the video below, as he continues to show his admiration for the Reds.

Grealish will no doubt be fully focused on helping keep Villa in the Premier League this season after their promotion at the end of the last campaign, but if they can’t match his ambition moving forward, it will be interesting to see if he decides to move on.

While Liverpool look well set as they continue to compete for major trophies, it remains to be seen if they perhaps see Grealish as a potential transfer target in the future, as he clearly thinks a lot about the Merseyside giants and much will be made of his ongoing comments if they continue.

For now though, it’s hard not to be impressed with what Liverpool are doing this season as they continue to win games while not being at their best as they look to dethrone Manchester City.